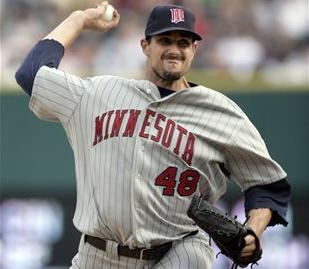 The top free agent pitcher left on the market, Carl Pavano, has decided not to go anywhere.  Today, he agreed to a two year, $16.5 million dollar contract with the Minnesota Twins.  He will earn $8 million in 2011 and $8.5 million in 2012.  It seems like Pavano and the Twins have been close to this deal for weeks, as most people believed that he would end up staying.  Last season, Pavano went 17-11 for the Twins, registering a  3.75 ERA in 221 innings pitched.  He tied Cliff Lee for the most complete games in the American League with seven.

By keeping Pavano and the recently resigned Jim Thome, the Twins keep intact most of the team that won ran away with the AL Central last.  In 2011, however, the Tigers and the White Sox should improve on their 2010 records.  The Tigers added slugger Victor Martinez and their rotation should be more consistent than it was last season, as Max Scherzer and Rick Porcello began to pitch better by the end of last season (and yeah, they have Justin Verlander too).  The White Sox added Adam Dunn to an already potent lineup that includes Paul Konerko, Carlos Quentin, Alex Rios, Alexei Ramirez and Gordon Beckham.  They also have a great rotation with Mark Buehrle, John Danks, Gavin Floyd, Jake Peavy (hopefully healthy) and Edwin Jackson (hopefully effective).

The AL Central race should be a lot closer this season.  The key to the Twins winning again is not keeping Thome or Pavano, but having Justin Morneau healthy for an entire season.  Last season, he had concussion problems during the second half of the season.  The Twins played well enough to capture the second best record in the American League.  Don't bet on that happening again if Morneau is out for a lengthy amount of time.
Posted by Taylor at 12:29 AM