Fantasy Friday: Who Should be the First Pick in your Fantasy Draft? 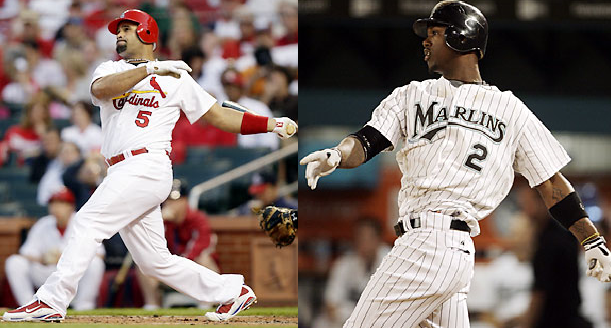 This is the first installment of Fantasy Friday, which will become a weekly occurrence here at COTB.  Now that the regular season is just around the corner, fantasy drafts have begun.  Most people would say that Albert Pujols should be the first player off the board, and there is obvious consensus that he is the best player in baseball.  However, if you have the first pick in your fantasy draft, should you take Pujols or can you draft a better all-around team by taking Hanley Ramirez with your first pick?

Pujols and Ramirez and ranked as the first and second best fantasy options by ESPN, respectively.  For Pujols, ESPN projects a slash line of .325/.430/.628 (avg/obp/slg) with 43 home runs, 123 RBI and 118 runs.  That's insane, and obviously shows that Pujols is the overall best player.  For Ramirez, ESPN projects a slash line of .314/.392/.518 with 26 home runs, 98 RBI, 106 runs, and 33 stolen bases.  Obviously not the overall numbers that Pujols is expected to have, but still among the upper echelon of MLB players and easily the best statistics for a shortstop (and he can pick you up a lot of steals, a very underrated category if you play with it).

The argument for Pujols is obvious (he's the best player in baseball), but the argument for Ramirez has more to do with what position both of them play.  Pujols plays first base, which is a much deeper position than shortstop.  If you take Ramirez first overall, and miss out on Pujols, there are many other options that can give you great production at first base.  Even if you miss out on the first baseman ranked 2-5 by ESPN (Miguel Cabrera, Joey Votto, Adrian Gonzalez, and Kevin Youkilis), Mark Teixeira, Prince Fielder, Ryan Howard and others should still, theoretically, be on the board.  The tenth best first baseman, as ranked by ESPN, is Buster Posey (who holds dual membership as both a catcher and first baseman), who is projected to hit .294 with 21 home runs and 78 RBI in 2011.  That is almost a worst case scenario, because unless everyone in your league drafts a first baseman in the first round, you should have a better first base option available during your next few picks.

However, the tenth best shortstop, as ranked by ESPN, is Dodger Rafael Furcal.  He is projected to hit .287 with 10 home runs, 50 RBI and 26 steals.  Not bad, but nowhere near Hanley's production.  After the second best shortstop, Troy Tulowitzki, is off the board, there are significant questions about every other shortstop left available.  Can Jose Reyes be consistent?  Is Derek Jeter too old to perform well for a full season?  Will Jimmy Rollins ever be close to his 2007 self again?  You get the point.  Hanley provides a lot more security at the shortstop position than almost anyone else, except maybe Tulo.  Pujols is easily the best and most consistent player in the bigs, but there are other first baseman who can give you spectacular production in 2011.

Either way, you get great production.  However, there are very few shortstops that have the all-around talent that Hanley Ramirez possesses.  If you have the first pick in your upcoming fantasy draft, it is definitely worth pondering which pick will make your overall team better.  However, if I have the first pick when my draft comes around, it would be extremely hard to pass up the consistent production of Pujols, the best player of his generation.  The choice is yours.
Posted by Taylor at 5:29 PM