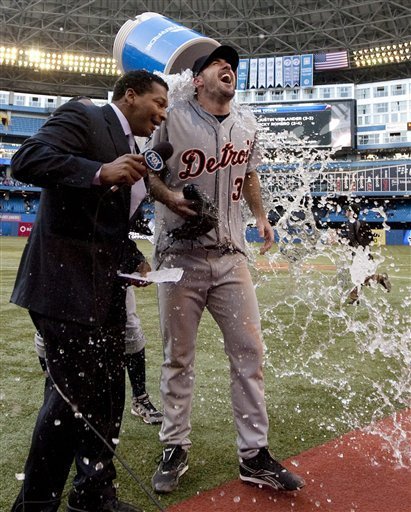 Just four days after Twins pitcher Francisco Liriano threw the first no-hitter of the 2011 season, Detroit's Justin Verlander followed suit with the second no-hitter of 2011, blanking the Blue Jays 9-0 on Saturday afternoon.  While Liriano's no-no wasn't normal gem that fans expect from a no-hitter, Verlander's game on Saturday was a masterpiece, and he was only an eighth-inning walk away from throwing a perfect game.  Today's no-no is the second no-hitter of Verlander's career.  His first came on June 12, 2007.

The reason that Verlander's no-hitter is clearly better than Liriano's?  Control.  Liriano struggled through nine innings, throwing 123 pitches, walking six and only striking out two.  He threw a first-pitch strike to only 10-30 batters.  Verlander, on the other hand, threw 16 first-pitch strikes to 27 batters (the minimum you can face in a nine inning game).  He only struck out four batters, but his lone walk was issued to Blue Jays catcher J.P. Arencibia on a full count in the eighth inning.  Verlander didn't labor through nine innings like Liriano either, hitting 99 mph and 100 mph on the last two fastballs he threw.

Verlander became just the 30th pitcher in Major League Baseball history to throw two or more no-hitters in a career.  Only five pitchers have ever thrown more than two no hitters: Nolan Ryan (7), Sandy Koufax (4), Larry Corcoran (3), Bob Feller (3), and Cy Young (3).  The only active pitchers with multiple no-hitters are Mark Buehrle (age 32) and Roy Halladay (age 33).  Verlander is the youngest of the three, and at age 28 he is in the prime of his career.  If he doesn't sustain any serious injuries, Verlander has a good chance to throw at least one, maybe even two more no-no's.

The above video is a little shaky because someone was filming their TV, but you can still see the last batter of the game, Rajai Davis, wiff on a breaking ball to end it.
Posted by Taylor at 9:48 PM