Can the Indians Keep Winning? 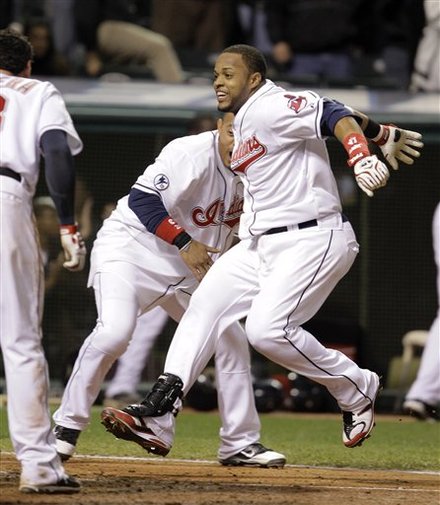 The Cleveland Indians have only played 25 games so far in 2011, a mere 15.4% of the season, but they have managed to compile a record of 17-8.  That .680 winning percentage puts the Indians on pace to win 110 games this season.  No other team in the AL Central has a record better than .500 and the Indians already have a 4.5 game lead over the second place Kansas City Royals (who thought the Royals were going to be in second place this far into the season?).  The major question surrounding the Indians shouldn't be whether or not they will 110 games, or even 100.  Fans should be asking whether or not the Indians can compete for an entire season and still be in contention for the AL Central crown in September.  Based on how the teams in the AL Central have been playing so far, the winner of the division may not even need to win 90 games.

So can the Indians actually compete for 162 games?  There are some signs that point to continued success.  Cleveland has won 11 of 13 of home and currently sports the third highest batting average in the majors (.274), the fourth highest home run total (32), and the second highest on-base percentage (.346).  The Indians are also hitting .325 with runners in scoring position.  The pitching has also been solid, as the Indians have compiled the ninth best ERA in the bigs at 3.62.

Cleveland also has some individual performers that should give Indians fans hope that their fast start isn't an illusion.  Grady Sizemore has sizzled since his return from injury, hitting .378 with 4 homers in only 45 at-bats.  Travis Hafner has also woken up after three sub-par, injury filled seasons.  So far in 2011, Hafner is hitting .342 with 4 homers.  Star rightfielder Shin-Soo Choo, who normally flies under the radar but is one of the better right fielders in the game, is only hitting .253.  If he can raise his average closer to his .295 career average, the Indians offense could actually improve.  Catcher Carlos Santana is one of the most promising young catchers in the game, as he showed with his walk-off grand slam on Friday.  If he can hit more like that more consistently, Cleveland will have another solid piece in the lineup.

So far in 2011, the Indians pitching staff has an ERA roughly 0.70 runs lower than the ERA they posted last season.  Justin Masterson has been spectacular, recording a 5-0 record with an ERA of 2.18 and 22 strikeouts in 33 innings.  Hitters are only batting .217 against Masterson.  Josh Tomlin has also been very good, going 4-0 with an ERA of 2.45.  If Fausto Carmona can lower his 5.15 ERA closer to the 3.77 ERA he had last season, then the Indians pitching staff may be in good shape for the long haul.  Rookie Alex White (the Indians first round pick in 2009) pitched well in his major legue debut tonight, giving up two runs in six solid innings.

Yes, the Indians are only 25 games into the season, but they have easily been the biggest surprise of the first month of the season.  There are some things that could signal a downturn.  The Indians haven't taken advantage of the rest of their division's struggles, going only 7-6 against the AL Central.  They also are 6-0 against the AL East and they are unlikely to keep playing so well against such a powerhouse division.  They definitely won't win 110 games, probably not even 100.  However, they have definitely have the potential to win the AL Central, especially with the holes that every other team in the division seem to have.  Expect the Indians to be right in the thick of things come September.
Posted by Taylor at 9:05 PM