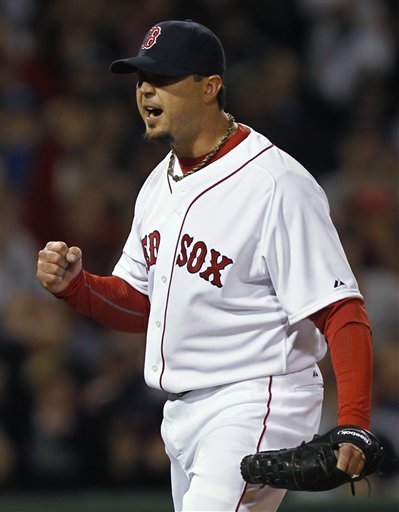 Before last night's Red Sox v. Yankees matchup, the Sox record stood at 1-7 and Josh Beckett was given the task of avoiding another lost series.  That probably didn't give Boston fans much confidence in the team's ability to win on Sunday.  Beckett was abysmal in an injury-plagued 2010 campaign, which included a 1-2 record and 10.04 ERA in five starts against the Yankees.  In his first start of the season, Beckett only lasted five innings against the Cleveland Indians, giving up three runs while striking out four and walking four.  It's safe to say that many fans didn't expect what happened against the Yankees last night.

Josh Beckett pitched like he hadn't pitched in two seasons, silencing the Yankees bats that had mashed Boston pitching on Saturday and giving the Sox their first series victory of the season.  The Sox won 4-0 and in eight innings Beckett allowed only two hits and one walk while striking out 10.  He retired the first seven batters that he faced, and later on in the night he retired the last 14 batters that he faced.  He was utterly dominant, as only two of his outs even made it to the outfield.

Suddenly, things aren't so bad in Boston.  It's amazing how things can fluctuate in Boston with just one victory.  The Sox beat the Yankees on Friday and suddenly the season was back on track.  Saturday, of course, brought another whooping (and four Yankee homers) and suddenly the determination was that the Sox were finished.  Now, with their win on Sunday, the Red Sox have a real opportunity to put together some wins and fully right the ship.  They begin a series with the Rays tonight at Fenway and the Sox have a real chance to sweep, as the Rays have been absolutely pitiful through nine games.  Dustin Pedroia's nine-hit weekend has sparked the offense, and hopefully Carl Crawford can snap out of his slump by playing his old team.

Yes, the Red Sox still have some problems (such as 16 runners left on base during Sunday's game), but things seem to be pointing in the right direction.  Jon Lester and Beckett have both pitched extremely well in their last starts and the back end of the bullpen has been solid over the last week.  After nine games, the Baltimore Orioles are in first and the Red Sox are in fourth in the AL East.  It won't finish like that and the Sox finally seem to be making a step in the right direction.  Every team slumps, the Red Sox just weren't expected to begin the season that way.
Posted by Taylor at 3:45 PM