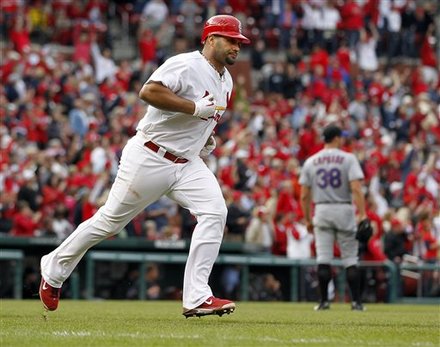 For a season that wasn't supposed to have any exciting playoff races, there are suddenly two close races to watch out for.  The Boston Red Sox have been in a tailspin since the beginning of September and the Tampa Bay Rays have taken advantage to pull within two games in the AL wild card.  The Sox epic collapse has caused people to overlook the mediocre play of the Atlanta Braves in the NL.  Once considered a virtual lock to win the wild card, the Braves have gone 8-13 in the month of September.  Coupled with a resurgence by the St. Louis Cardinals, who have gone 14-6 in September, the NL wild card gap is now only two games.  St. Louis missed a golden opportunity to move within one game yesterday, blowing a 6-2 lead in the ninth inning against the Mets on a night when the Braves were off.

With six games left who is in a better position to win the wild card?  Based on each team's schedule, the edge goes to the Cardinals.  St. Louis will play three games each against the Chicago Cubs and the Houston Astros, two of the three worst teams in the NL.  Atlanta will play three against the Washington Nationals and three against the Philadelphia Phillies.  The Nationals are 8-2 in their last 10, including a sweep of Philly.  The Phillies have lost six straight but still easily have the best record in the game and may want to capture some momentum before the playoffs start.  Luckily for the Braves, there aren't many games left to make up the two game gap.  However, it would not be surprising to see the Cards run the table while Atlanta falters.  Look for St. Louis to take home the NL wild card.
Posted by Taylor at 2:41 PM