Thanks to a three-run homer by Jacoby Ellsbury in the 14th inning, the Red Sox finally won again and managed to keep a game between themselves and the Rays.  After a poor first inning on Sunday night, John Lackey pitched surprisingly well, giving up three earned runs in six innings.  After Chris Dickerson's sacrifice fly scored Brett Gardner in the seventh inning, both teams were held scoreless for six innings until Ellsbury's game-winning shot.  Papelbon pitched well in relief for the Red Sox, throwing 2.1 scoreless innings (which included getting out of Daniel Bard's bases loaded jam in the bottom of the ninth).

The Rays beat the Blue Jays 5-2 on Sunday Afternoon thanks to eight strong innings by Wade Davis.  Their five runs all came on the long ball: B.J. Upton and Ben Zobrist hits homers in the first inning, Evan Longoria went deep in the third, and Kelly Shoppach homered in the sixth.  Combined with Boston's doubleheader split, the Rays now sit one game behind the Sox in the AL wild card race, with three games to go.

In the National League, the Braves offense didn't show up the ballpark and Atlanta dropped their second straight game to the Nationals by a score of 3-0.  Ross Detwiler pitched six shutout innings for the Nats, while the Washington offense scored their runs on home runs by Wilson Ramos and Michael Morse.  The Braves' road to the playoffs doesn't get any easier, as they host the Phillies in a three-game set to end the season while nursing a one-game lead over the Cardinals in the wild card. 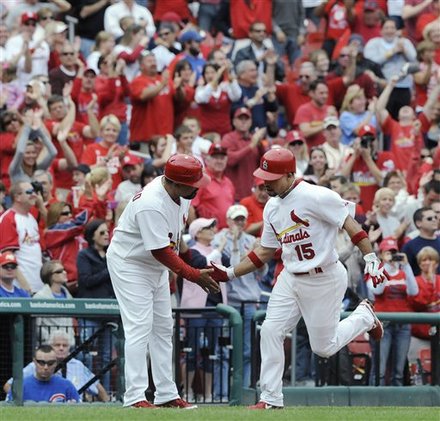 St. Louis managed to move closer to Atlanta yesterday with a close 3-2 win over the rival Cubs.  Octavio Dotel picked up the win in relief of starter Edwin Jackson, and the Cardinals scored two runs late on home runs by Yadier Molina and Rafael Furcal.  The Cards will be on the road in Houston to end the season, and they have a very good chance to overtake the struggling Braves.