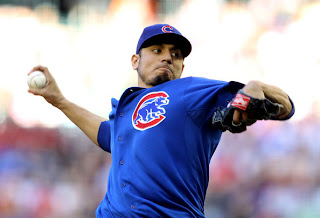 Just when the Cubs' luck seemed to have turned in their series with the Red Sox, more bad luck hit.  Despite the 9-3 comeback victory over Boston tonight, the Cubs scratched starter Matt Garza because of stiffness in his pitching elbow.  Despite his 2-4 record this season, Garza has been one of the Cubs more reliable starters this season.  He has compiled a 3.72 ERA and 68 strikeouts in nine starts so far in 2011.  Garza will be examined by the Cubs' team doctor on Monday and he will most likely undergo an MRI.  Garza could have been a big help to the Cubs tomorrow night, as his experience with the Rays in the AL East would have been quite valuable against Boston.

Instead, the Cubs will turn to lefty James Russell to try and win their second game of the series.  Basically, Manager Mike Quade is conceding defeat to the Red Sox.  While Russell pitched effectively enough on Friday night, throwing three scoreless innings, he has been pretty bad all season.  After starters Randy Wells and Andrew Cashner were put on the disabled list earlier in the season, Russell was added to the rotation.  The results haven't been pretty.  So far this season Russell has gone 1-4 with a 6.26 ERA and only 13 strikeouts in 23 innings.

The problem is that the Cubs don't really have any better options.  Randy Wells only has one rehab start under his belt and the Cubs have no good options at Triple-A to make a spot start.  The Cubs will have to lean on Russell and the bullpen to get them through a game against a great Boston offense.  That can only spell trouble.  The Cubs have been absolutely terrible on the mound this season, ranking 28th in the majors in ERA, 30th in quality starts, 29th in WHIP, and 27th in batting average against.  Unfortunately, those numbers might just get worse on Sunday night.
Posted by Taylor at 1:44 AM