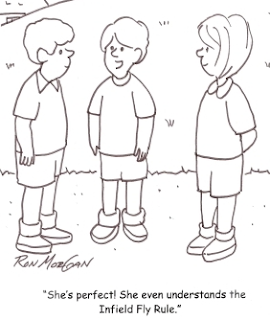 Last week, watching the World Series was more challenging than usual.  It had nothing to do with the fact that I dislike both teams that were competing in the 2011 Series (Especially the Cardinals.  As a Cubs fan, it pains me to watch them win another championship.), or that I had a lot of work to get done for my college classes, or even that the games are on late and take forever to finish.  In fact, if it were up to me I wouldn't have done any work and I would have skipped my morning classes so that I could stay up and watch every out without missing out on a solid eight hours of sleep.

What made watching the World Series slightly challenging (but funny at the same time) was sitting next to my girlfriend for a few of the games.  She's knows her sports (she plays basketball and runs track), but she still loves to ask questions when we're watching baseball.  The typical "who's that?" or "why is he doing that?"  The best question came during game two, when she asked why a baseball runner ran to second, even "if he was going to get outed."

Watching a baseball game with your girlfriend definitely involves more questions than watching the game with your buddies.  Buy hey, the fact that she's willing to sit and watch a game on TV means something.  Anyone who knows me knows that even watching a game alone I get animated, stressed out easily, and sometimes yell at the TV.  If Paige is willing to sit through that spectacle, then I'm willing to indoctrinate her into the world of baseball nuances and terminology.
Posted by Taylor at 5:57 PM