Rookie of the Year Votes are in... and the Voters Messed Up the National League

The winners of the Rookie of the Year awards were announced yesterday and both winners, Buster Posey of the Giants in the NL and Neftali Feliz of the Rangers in the AL, won easily over their first-year counterparts.  Great job by the voters in the AL, seeing as Feliz really had no competition for the award.  Granted, Austin Jackson of the Tigers (not exactly a great ballclub) hit .293 with 27 stolen bases and an OBP of .345, but Feliz recorded 40 saves for the first place Rangers (blowing only 3), struck out 71 in 69.1 innings, and had an ERA of 2.73.  Oh yeah, opponents only hit .176 off him and his WHIP (walks and hits per inning pitched) was a spectacular 0.88. Nuts.  Feliz received 20 first place votes on 28 ballots.  Can’t really say anything bad about this choice, except why the hell did 8 voters not give Feliz their place votes.  I’m assuming they all live in the Detroit metro area.
I do have a problem with the NL voting.  They got the wrong guy, and by a wide margin.  Yes, Posey had a spectacular season, and he managed to hit the same number of homeruns (18), record only five fewer RBI (67 to Jason Heyward’s 72), and hit .305 (compared to Heyward’s .277) in 114 fewer at-bats than Atlanta Brave rookie Jason Heyward.  Both the Braves and Giants made the playoffs, with the Giants winning the World Series, of course.
However, some important statistics separate Heyward and Posey.  First off, Heyward was the Braves Opening Day right fielder (he also happened to crush a 463 foot bomb in his first career at-bat off Cubs starter Carlos Zambrano), while Posey was not called up until late May.  Playing 34 more games than Posey, Heyward was able to record the 4th highest on base percentage in the entire national league at .393.  That fell behind only Joey Votto, Albert Pujols and Prince Fielder, respectively.  Heyward also drew 91 walks, which was tied with potential MVP Votto for 4th in the NL behind Prince Fielder, Albert Pujols and Adrian Gonzalez.  Those 91 walks were also the third most ever for a player in his 20-age season (Heyward did not turn 21 until August).  The players with more at the same age?  Hall of Famers Mel Ott and Ted Williams.  Not bad company.  While there is definitely a case for Posey, the younger Heyward would have gotten my vote.
We should expect Heyward to have a ridiculously good career. Let’s compare Heyward’s fist year stats to another rookie of the same age…
Heyward:
134 G, 623 PA, 520 AB, 83 R, 18 HR, 72 RBI, 91 BB, 128 K, .277 BA/.393 OBP/.456 SLG, 131 OPS+
Rookie X:
122 G, 509 PA, 468 AB, 58 R, 13 HR, 69 RBIs, 28 BB, 39 K, .280 BA/.322 OBP/.447 SLG, 104 OPS+
Whose rookie X, you ask?  It happens to be Hank Aaron and his stats from his rookie year in 1954.  Heyward can easily be compared to the best Brave of all time, who is also one of the best players of all time and the rightful Homerun King.  Not bad for one year in the Bigs.  Hopefully Heyward can stay healthy and continue to follow the same trajectory that Hammerin’ Hank did.  Big shoes to fill, but Heyward definitely has a shot. 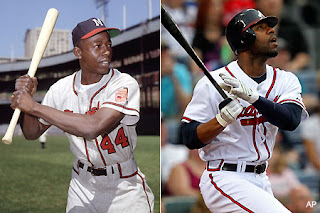