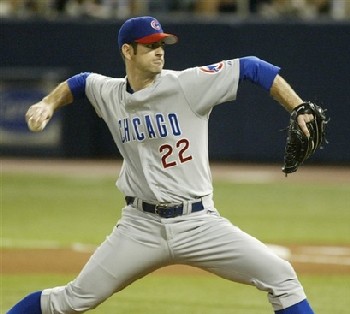 The end of today’s Baseball Notes section in the Boston Globe included updates on nine players, two of which are current and intriguing free agents.  Number one is Mark Prior, who tore his labrum (definitely not his first setback) three years ago and is still trying to get back to the bigs.  He was the second overall pick in the 2001 draft by the Cubs (behind the best catcher and possibly the nicest guy in the game, Joe Mauer) and last pitched in the majors for Chicago in 2006.  When he was only 22 in 2003 he went 18-6 and helped lead the Cubs to the NLCS.  He was anointed as the next Cubs great, only to have is career ruined by injuries and also probably by overuse from former Chicago manager Dusty Baker.  This would be a spectacular comeback.  Prior pitched 11 innings without giving up an earned run for the Ocean County Flyers of the independent Golden League this past season, striking out 22 and giving up only 5 hits along the way.  Three teams are said to be awaiting a decision from the former ace.  Hopefully everyone still has their #22 Prior shirts tucked away in their closets, I still rock mine on a regular basis.

The second intriguing free agent is the man formerly known as Jesus, Johnny Damon.  Formerly beloved by Red Sox Nation, Damon then left the Red Sox for the Evil Empire in New York.  The Globe reported, however, that Damon said “Boston would now be a good spot” when asked about his future.  Last season, Damon nixed a chance to return to the Sox at the trade deadline, so Boston fans probably wouldn’t jump back on the Damon bandwagon too quickly.  Last season, in 145 games for Detroit, Damon hit .271 with 8 homers and 51 RBI.  He just recently turned 37 and is probably only good enough now to be a glorified fourth outfielder.  Sox GM Theo Epstein should pass on Damon, and focus his efforts on filling outfield holes with younger and better talent such as Carl Crawford or Jayson Werth.  Damon is too much of a liability, especially for the money they would most likely be paying him.
Posted by Taylor at 11:23 PM