I've only been watching the Northwestern vs. Illinois football game (battle for the Land of Lincoln Trophy) for about five minutes and it is already one of the coolest college sporting events I've ever watched.  Yeah being born in Illinois makes the match-up of the in-state rivals more compelling, but the fact that the game is being played at Wrigley Field makes the game a must watch.  Wrigley is my favorite stadium and a landmark of baseball and American sports.  This is the first football game at Wrigley since the Bears last played there in 1970.  The last college football game at Wrigley was played 72 years ago in 1938, between DePaul and St. Louis (neither school even has a football team anymore).  Northwestern vs. Illinois last took place at Wrigley in 1923.

Whoever proposed this idea needs a promotion.  The game has gotten tremendous buzz in Chicago and I'm thanking God that Trinity College has ESPN-U in its cable package.  Also, props to ESPN for sending College Gameday to Chicago for this week's show.  The only problem?  The famous Wrigley marquee was painted over from red to Northwestern purple.  I understand that the Ricketts family (the Cubs owners) wanted to promote the game, but come onnnnnnn.  The marquee... purple?  That's just sacrilegious. 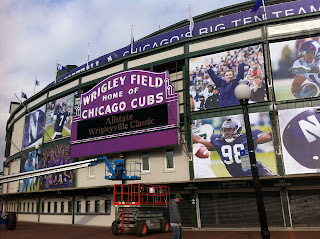 If you want to check out another game at a baseball stadium tune into NBC at 7 pm tonight for Notre Dame vs. Army at Yankee Stadium.  Should be another great one.