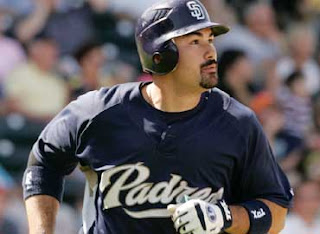 It's been a long time coming, but the Red Sox finally have traded for Padres 1B Adrian Gonzalez.  They have agreed to send minor leaguers Casey Kelly, Anthony Rizzo and Reymond Fuentes, plus a player to be named later, to the Padres in order to acquire Gonzalez, who has been on Theo Epstein's wish list for the last few years.  Kelly is the best pitcher and best prospect in the Sox minor league system, and Rizzo is in the Sox top 5 minor league prospects.  Even with giving up those prospects, the Sox made a great deal.  Gonzalez is only 28 and plays great defense at first base.  He is also a perfect hitter for Fenway Park, where the Green Monster and a short right field offer the left-handed hitting Gonzalez a better home field than PETCO Park did in San Diego.  Last season, Gonzalez hit .298 with 31 homers and 101 RBI.  He also recorded a .393 on-base percentage and a .511 slugging percentage.

Even with the loss of Victor Martinez earlier in free agency, the Red Sox lineup is much better with Gonzalez in the middle of it.  Gonzalez is a better hitter than Martinez, and he now combines with 2B Dustin Pedroia, former 1B Kevin Youkilis (who will presumably move to 3B), and an aging David Ortiz (who still managed to hit 32 homers with 102 RBI last year) to create a very potent middle of the order in Boston.  The other great thing about the trade?  It allows the Red Sox to continue pursuing outfielders Carl Crawford and Jayson Werth.  Accorind to Yahoo!Sports writer Jeff Passan, the Sox got rid of $37 million in salaries this offseason and are prepared to get rid of roughly $45 million next year.  If Epstein can add Crawford or Werth, the Red Sox lineup will be absolutely stacked.  The pitching is bound to have a better and more consistent season than last year, and with a bolstered lineup, the Red Sox could be the team to beat in the American League East.

Here is the projected Red Sox lineup for 2011, by position (and only based on players the Red Sox currently have on their roster):
C- Jarrod Saltalamacchia
1B- Adrian Gonzalez
2B- Dustin Pedroia
3B- Kevin Youkilis
SS- Marco Scutaro/Jed Lowrie
LF- Ryan Kalish (if no other free agent is signed)
CF- Jacoby Ellsbury
RF- JD Drew
DH- David Ortiz