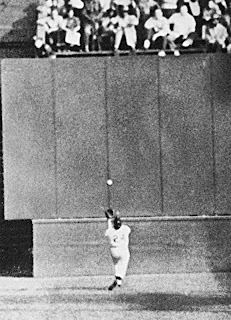 There have been plenty of great center fielders: Ty Cobb, Joe DiMaggio, Mickey Mantle, Ken Griffey Jr., Tris Speaker, Duke Snider.  However, the greatest center fielder to play the game had to have been Willie Mays, and in my opinion that's a pretty easy choice.  He was the epitome of a five-tool player and he was a superstar during his 22 seasons playing with the Giants and the Mets.  It's hard to argue against Mays being the best all-around baseball player ever.
Mays began his professional career in 1947, when he played with the Chattanooga Choo-Choos during the summer while he was still in high school.  After playing for the Choo-Choos for a short time he returned home to Alabama in order to play with the Birmingham Black Barons.  The New York Giants signed Mays in May of 1950 and he made his Major League debut on May 25, 1951.  He was only twenty years old.

On defense, Mays was just as much of a force.  He won 12 Gold Glove Awards (in consecutive years) and holds the all-time record for putouts by an outfielder with a total of 7,095.  "The Catch", which took place in Game 1 of the 1954 World Series against the Indians, is the most iconic defensive play in the history of Major League Baseball.  He owns a career fielding percentage of .981.

During his career, Mays appeared in 24 All-Star games.  He won the 1951 Rookie of the Year award, as well as the National League MVP award in 1954 and 1965.  He was the MVP of the All-Star game in 1963 and 1968 (back when players actually played most of the game: he played all nine innings of an All-Star game 11 times).  He was ranked second to Babe Ruth among the 100 greatest baseball players of 20th Century by "The Sporting News" in 1999.  ESPN ranked him eighth in their ranking of the top 50 athletes of the 20th Century.  He will always be remembered as one of the best ever to play the game.